The Lightning are a true giant of this year’s NHL. Their hugely-anticipated first matchup with the Nashville Predators proved both teams’ elite status.

As the clock struck three minutes remaining in the third period, the Nashville Predators approached their biggest victory of the regular season. The Tampa Bay Lightning do not lose games very often. Even without top players Ondrej Palat and Victor Hedman, they landed in Nashville after shutting out the Blackhawks in Chicago.

In the other corner, the Nashville Predators are on the cusp of a franchise-defining season. After forcing the attention of the entire league on Music City in last year’s playoffs, they are following it up with a dominant season.

All that said, every hockey fan with a clue had this game circled on the calendar. Let’s take a look at how it all shook out.

Usually, with home-ice advantage, the Predators match their top line against their opponent’s weaker players. However, Tampa Bay is not your typical opponent. Take a look at the primary matchup from last night’s game: 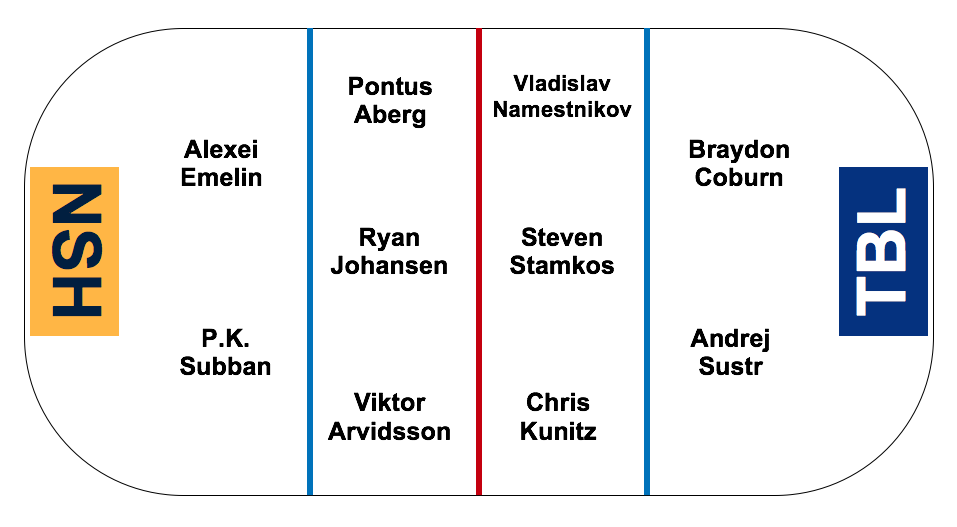 Technically speaking, that is Tampa Bay’s second forward line. However, much like Nashville, the top six is essentially interchangeable.

This matchup was featured in the game for roughly seven minutes total. The major takeaway is the usage of Nashville’s first forward line. In previous seasons, Ryan Johansen‘s lines have been matched against the weakest opposition possible. Last night, the line performed more of a shutdown role, attempting to keep Steven Stamkos at bay.

Unfortunately, it’s hard to argue Nashville’s strategy was successful. While the trio combined for a goal and two assists, Tampa Bay steamrolled them in possession. Here’s a look at the numbers from Johansen’s line, including unblocked shot attempt percentage (FF%), high-danger chance percentage (HDCF%), and offensive zone start percentage (oZS%):

In a word: yikes. Even with just a single faceoff in the defensive zone, they produced almost zero offense in relation to Tampa Bay. Watching the game, I thought Johansen and Aberg had their best games in a while. However, it absolutely did not translate to the statline.

To summarize so far, Nashville’s top line had very little contribution to the overall effort against Tampa Bay. Fortunately, there are nine other forwards on the team to pick up the slack. The night belonged to players like Austin Watson, Colton Sissons, and Nick Bonino.

Undoubtedly, Nashville Predators fans know the value of depth, especially in the playoffs. When a team’s star players are shut down or injured, success is dependent on lesser known players to rise up and answer. When the NHL leader is in town, it’s a great example of how valuable a team’s bottom six truly is.

For Nashville, the news is good. The Predators allowed zero high-danger chances at five-on-five while Austin Watson was on the ice. With Sissons, they allowed just a single high-danger chance. Playoff games, especially, will be decided in the low slot, where goaltenders have the most difficulty. A team that can shut down those chances with depth players on the ice, especially against top opponents, will go far into the postseason.

When the dust settled, Nashville conceded yet another late goal to lose their grasp on a regulation win. True, it’s been a worrying trend all season. Against a team like Tampa Bay, however, they get a pass from me. The Nashville Predators have now earned at least a point in their last seven games.

In the Central Division, which features five of the NHL’s top ten teams, there is still almost no separation. Points are absolutely essential, and an overtime loss is perfectly acceptable against the best team in the league.

The Predators have a big matchup in New Jersey tomorrow night before the all-star break. It’s the last good chunk of time off for these players. Hopefully, they’ll return next week with renewed focus and determination. The remainder of this season is guaranteed to be a truly wild ride.