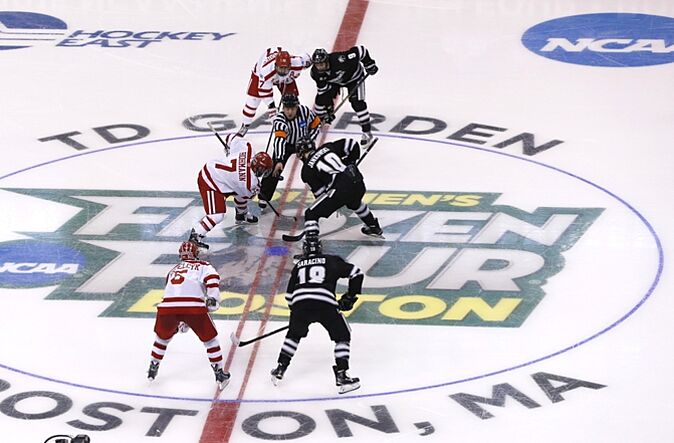 Vesey is currently a draft pick of the Predators and has the chance to join them once his team is eliminated from Post-Season play. In our article, “Nashville Predators Waiting for Jimmy Vesey“, we answered a lot of questions as to the hows and whys of Vesey playing for the Preds.

Last weekend Vesey and the Crimson squad of Harvard beat Rensselaer Poly in two straight games to move to the Semi-Finals of the ECAC on Friday. Harvard, the three-seed, will face four-seed St. Lawrence in the second semifinal contest because number two-seed Yale was upset by the seven, Dartmouth.  Harvard beat St. Lawrence in their only meeting this season 3-2.

The winner of the Harvard-St.Lawrence game on Friday will play the winner between Quinnipiac and Dartmouth in the championship game on Saturday evening. Regardless of how they do now, Harvard is almost assured of a spot in the regional tournament to find the Frozen Four. Those teams are announced on March 20th.

The Regional Championships take place on the weekend of March 25th -27th at four locations. The four winners go to Tampa for the Frozen Four on April 7th and 9th.  Somewhere in there, Harvard will finish their season and Vesey will have to decide to join the Predators or wait until after August 15th for Free Agency.

Congrats to @_KC11_ and @19Vesey, winning ECAC Student-Athlete and Player of the Year honors #GoCrimson pic.twitter.com/7rX9dyH5jH

In this article, we chronicled Vesey’s play in last weekend’s games against Rensselaer. He finished with two goals and an assist in the two games.  We will be doing the same thing this weekend as he plays in the finals.  So check back here after Friday’s and possibly Saturday night’s games to see how he did.

1st Period ends 0-0 but Vesey put one right across the front of the net with 28 seconds to go but couldn’t connect. He didn’t have a shot in the first period.

2nd Period starts with a goal by Vesey after a Colin Blackwell shot on goal at 59 seconds in to take the 1-0 lead.

.@Harvard_Hockey is first on the board making it 1-0 in the second period. @ECACHOCKEYMWD1#IceOnASN#ECACHockeypic.twitter.com/w7Ddiluli5

The second ended with no further scoring in a tight game. No more shots for Vesey although the Harvard club is winning the shot battle, 23-16

3rd Period shows St. Lawrence peppering the Crimson net with shots but can’t get one to hit the twine until the 14:36 mark to tie it at one. St. Lawrence outshot Harvard in that period 19-5.  Vesey had one shot. We are going to overtime. Will Harvard’s playoffs end early or will they go to the finals?

Overtime – The OT opened with a reviewed goal by Harvard’s Clay Anderson overturned. Then at 2:18 seconds into overtime, Kyle Criscuolo of Harvard deflected a shot by Jimmy Vesey to win the game 2-1.  They will now go to the finals to play #1 seed Quinnipiac who defeated Dartmouth 3-1.

Tonight’s win leaves little doubt that Harvard will make the tournament no matter the outcome of tomorrow night’s game. Vesey ended the night with a goal and an assist on two shots with a plus two rating. On to the finals.

The Harvard Crimson didn’t fare so well this evening and neither did Jimmy Vesey.  After the first period ended scoreless, the Quinnipiac Bobcats scored three unanswered Power Play goals in the second to take a 3-0 lead.  Harvard answered late in the second with a Ryan Donato unassisted goal.  The game continued that way until the Bobcats scored an empty netter with less than two minutes in the game.

Vesey didn’t figure in the scoring although he had some chances.  He finished with two shots and a minus 1 plus/minus rating.  We will now wait until tomorrow to make sure that the Harvard Crimson inevitably get into the Regional Playoffs for the Frozen Four as a At Large Bid.

The Regional Championships take place on the weekend of March 25th -27th at four locations. At each site, 4 teams will compete in the single-elimination competition. The two winning teams go against each other in a one-game Regional Final competition. The winning team from each of the four Regionals will advance to the Frozen Four in Tampa, Florida on April 7th and 9th.

As the playoffs get closer and closer to their conclusion, the choice for the talented left winger looms larger.  We should know in just a few weeks whether David Poile standing pat at the Deadline to keep a spot open for Vesey will pay off.