Nashville looks to stay hot in the nation’s capital, only losing once in regulation in the last 17 games.

Thursday night Nashville came out flying around and showed everyone that it is still tough to win in Smashville.

The Predators beat the Islanders 4-2 to tie the season series. The J line stayed hot seeing Ryan Johansen finally get into the scoring as well as James Neal netting his fourth goal in two games. Now the Predators play the President Trophy leader Capitals in an exciting match up.

Barry Trotz vs Nashville. Filip Forsberg vs Washington. East vs West. Those are just some of the headlines that make tonight’s game more enticing.

50-14-5. How does a team have such a great record playing in a division with the likes of the Rangers, Islanders, Penguins and Flyers? The answer is strong goaltending and a fierce offensive attack. It used to be the Alex Ovechkin Show and now the rest of the supporting cast has been clicking and has not let up.

Last year the Capitals were probably furious that they traded Filip Forsberg for Marty Erat. Second year veteran Evgeny Kuznetsov has allowed them to forget that the trade has even happened. Kuznetsov, just like everyone else on the Capitals roster, has had a record year. Even though Evgeny only has 20 goals, he has tailed 50 assists that have helped out Ovechkin and Nicklas Backstrom tremendously.

The rich just keep getting richer as the Caps only have had one player injured in top defenseman John Carlson and he should be able to play in tonight’s game after skating Monday. The Capitals have not played since Tuesday in a matchup against the Carolina Hurricanes which surprisingly went into OT. They cannot come out sluggish and slow in tonight’s tilt versus red-hot Nashville. 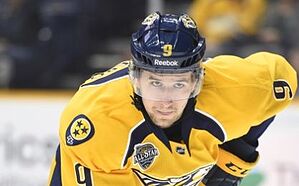 God Bless David Poile and Peter Laviolette. Because of Poile and Laviolette the Predators are on fire as of late. As of right now, the Nashville Predators are three points away from Chicago and they have lost only once in regulation is the past 17 games (12-1-5).

Nashville is finally looking like the team we are supposed to be with new first line center Ryan Johansen. All of the Predators lines have the ability to score at any moment in the game for the first time ever in team history. The brilliance of the line up is astonishing. Who would have thought that putting former first round pick Colin Wilson on the fourth line with grinder Austin Watson and face-off ace Colton Sissons would result in another scoring line?

Nashville is right where they need to be at this stage of the season. They are the best team in the NHL since Feb. 12, even picking up 15 more points than Chicago in that span. They just proved last night that they can beat tough Eastern teams as they beat the Isles 4-2. Now it is time to beat the “toughest” team in the NHL.

Tonight’s tilt in the nation’s capital has the potential to be one of the best games all season. The Predators will almost certainly rest Pekka Rinne and put Carter Hutton in the game which should be perfectly fine as he likes to stand on his head in big game situations. I see this game being very physical with a chance of a lot of scoring. Both teams have a great chance to win this game.

A win tonight and a Blackhawk loss will propel the Predators to a point away from 3rd place in the Central. At the beginning of January we asked if we could even make the playoffs. Now it’s who will we play in the playoffs? Come on Smashville, April is coming. Its time for hockey.

Next: Preds Triple J Line is Heating Up

The Nashville Predators return to Smashville in their next match to face the Los Angeles Kings Monday March, 21. That is a possible playoff matchup but they can’t look past tonight’s game to keep moving up the Central ladder.