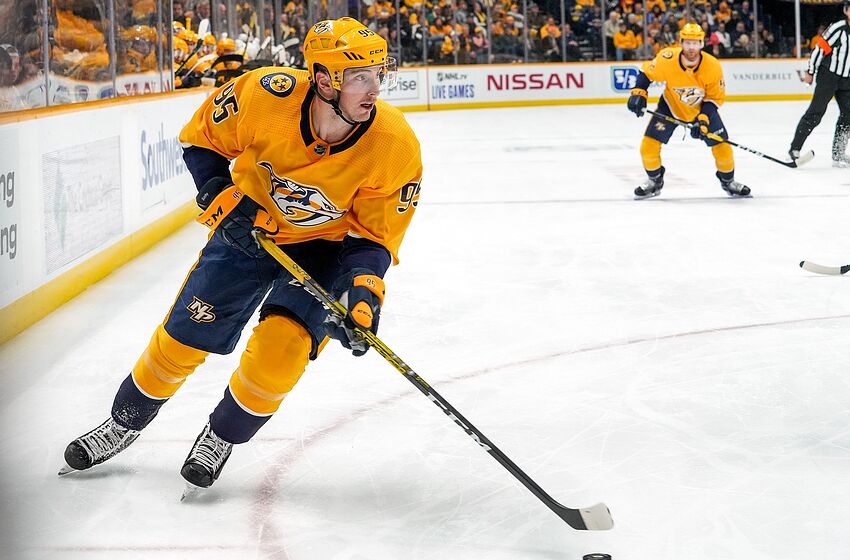 NASHVILLE, TN - OCTOBER 31: Matt Duchene #95 of the Nashville Predators skates against the Calgary Flames at Bridgestone Arena on October 31, 2019 in Nashville, Tennessee. (Photo by John Russell/NHLI via Getty Images)

We’ve passed the midway point of the 2019-20 season for the Nashville Predators. Let’s grade Matt Duchene‘s first half of the season.

There were a lot of big stories over the offseason for the Nashville Predators, but nothing topped the signing of Matt Duchene. He was always linked as a possibility to come to Nashville, and it finally happened and with a lot of national buzz surrounding it.

The natural thing you wonder is how much he’s actually helped this team and has he lived up to the expectations we had? The jury is still out as we should reserve ultimate judgement until the end of the season, but we can speculate on if he’s lived up to the hype so far.

Duchene really came out of the gate on fire to start his Predators career. He was piling on the assists in particular and looking unstoppable alongside Filip Forsberg. The Predators had an outstanding start to the season and looked like one of the best teams in the league thanks to how Duchene was playing early on.

Should we expect more?

Duchene is 3rd on the team in both assists with 20 and points with 30. Not lighting the world on fire by any means, but he’s productive. It would be fair to say you expected more out of a high caliber player like Duchene who came here with a lot of hype.

When you look at Duchene’s more advanced stats, he is generating offense for the Predators and deserves credit for that. He’s got a Corsi percentage of over 55 percent and is starting in the offensive zone on faceoffs over 60 percent of the time.

Furthermore, Duchene is finding his groove again as of late with a current four-game point streak and nine points in his last eight games. He’s becoming a more steady contributor as a mainstay on the team’s second line. He’s such a critical piece to what the Predators are trying to do every night.

It’s fair that expect Duchene to be averaging closer to a point per game average as a player who averages 17:25 of ice time per game and was brought here to make a big impact. He’s no doubt helping the team, but I think he’s capable of more, including making the power play more reliable.

With John Hynes now the new head coach of the Nashville Predators, you can ask how that will impact Duchene. Hynes has been implementing a new system where the centers play more of a role in getting the puck out of the defensive zone. It’s a small sample size, but it’s working early on as the Predators aren’t being bludgeoned for four or five goals recently.

Duchene obviously plays a key role in executing Hynes’ system. He’s a proven veteran in this league who should be able to lead the way and help the transition to a new head coach.

As it pertains to Duchene, I’m hoping they keep him and Forsberg on the same line as much as possible. Those two seem to feed off of each other and maximize each other’s production.

Duchene needs to remain being the point guard of sorts for this team. Generate the offense, boost the power play more and help lead the charge on implementing the system that Hynes is putting in.

I can’t give Duchene a top grade because of the high expectations I have for him. Much like Forsberg, Duchene is  player that I expect to have near-elite numbers. I’m waiting to see Duchene elevate it into another gear and really make the Predators a dominant force with their top two lines.

Duchene is under a lot of pressure to produce at a high level due to all of the national attention that was drawn to when the Predators signed him over the offseason. Can he elevate his game a little more and really help the Predators surge up the standings?